First things first, why is everyone fighting? The prize of  course! 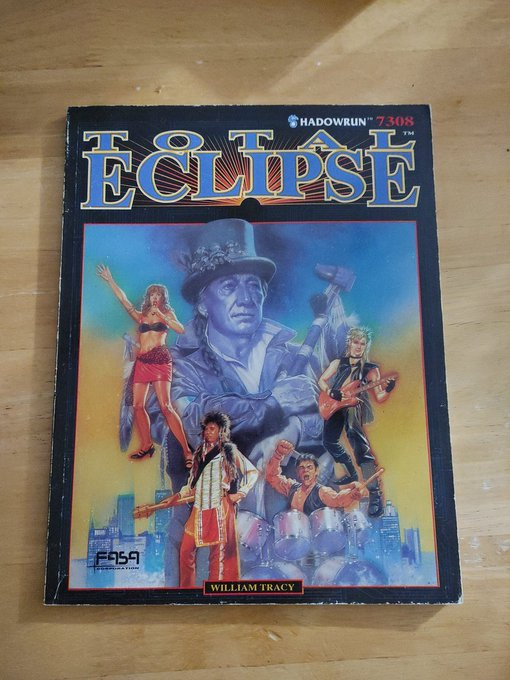 The word is out, chummer. If you want blazing rock and roll, there’s only one band to see: The Elementals. The buzz is they’re about to become the next local band to hit the big time.

There’s just one problem. The Elementals have broken their recording contract, and in the world of corporate domination, nobody goes solo.

The runners’ job? Find the band and bring them home. Alive.

With this 1st Edition book up for grabs, we had 28 runners come in to compete in this single elimination contest.

For this contest we decided to have all 4 steps be worth 1D6. If a player liked it +1D6 If followed (already a follower got this also) +1D6 etc for a maximum of 4D6.

As this is a first edition book we decided NOT to have edge or rerolls. This will be a single elimination game. We also knocked out the Bye rounds so some might have some surprises!

Round 1 was between 14 pairs fighting to a first blood competition. 14 runners were knocked out leaving only:

Then we moved into the narrated rounds.

Voice throws down  viscous blows, but it is matched by Kedrix shot for shot. (3/3)

Then Kedrix pulls out a small blade and throws it at Voice, hitting a winning point. (2/3)

NaNa flies out of the corner throwing a fireball right off slamming into Johnny! Johnny goes up in a flash of flame. Winner is NaNa (2/0)

Match 3 is between @CorrugatedCava1 and @Fastjack_

Corrugated flies around the corner, SMG firing on FA. El Reverendo dives for cover while returning fire with his Aires Predator. Both missing (3/3)

Corrugated continues to fire while El has to reload. C hits for a win. (2/1)

Liquid flows out swinging, Adept powers flowing through him, but Callum dodges and swings, both missing (2/2)

Callum kicks Liquid, it is a low blow! Groaning Liquid taps out (1/0)

ShadowRum pulls out a blade and dives at One, hitting One in the shoulder for the win. (1/0)

Pirate starts by tossing lightning at hakushi, slamming hakushi back against the wall. (4/0)

After the total tallies from Round Two are completed, we have 7 Shadowrunners remaining:

Congratulations for making it to the third round… Who will survive?

Going into Round 3 using the same rules, except it is now raining, Acid Rain.

Kedrix fires at Pirate who is distracted by the acid flowing down out of the sky. Pirate takes a hit to the neck, failing to continue in the match. (4/2)

NaNa throws a fireball spell, but it is weakened by the rain, fire washing harmlessly over Geoffrey.

Geoffrey retaliates by firing his pistol, striking NaNa hard in the chest. (1/3)

Corrugated runs towards SR, flying into a kick. SR staggers away from the kick, throwing an uppercut hit C in the gut. (2/3)

After the sneak attack and the rounds, the runners moving into the Semi-finals are:

For the next round, the rules will change a little.

Due to only having three contestants left we are moving into the FINALS.

For the finals each runner gets 4 hit boxes. Damage is calculated by the difference between rolls. Last man standing wins this classic book.

All three contestants move into a city park, the rain stops and they ready their first actions. I rolled for initiative the order is: @KedrixdotNet, @ShadowRumPdcst, then @GeoffreySavageW

The setting is a standard playground in one of Seattle’s parks. There is a playground, trees, paths, and picnic tables. All runners can ready themselves then we will begin.

K dives for cover while continuing to fire at GS, who dodges behind the slide. (2/3)

SR moves behind a tree and casts a chaotic world at K, causing K to loose 1D6 for the next attack along with -1 damage. (3/2)

GS returns fire at K for shooting at him, missing (3/4)

SR after taking a hit shoots K hitting (3/2) dropping K in a pool of blood.

@ShadowRumPdcst Stands up, raising his hands, lightning crackling through his fingers at @GeoffreySavageW, the electricity flying at GS, striking him in the chest causing 2 damage (4/2)

The smoke rising from Geoffrey clears, leaving ShadowRum swaying on his feet, victorious!

Congratulations go out to ShadowRum Podcast for this brutal victory!